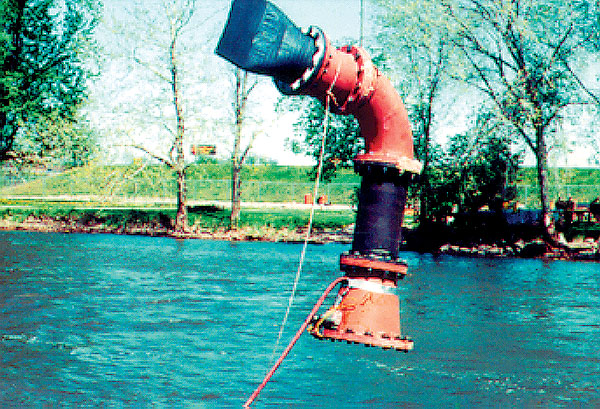 The City of Moline, IL., faced impending permit changes relative to chlorine-level regulations at its South Slope Wastewater Treatment Plant due to EPA regulations requiring a reduction of residual chlorine discharging into the Rock River. Moline needed to reduce the total residual chlorine in its effluent discharge without performing major modifications to its wastewater treatment process. At the same time, the city wanted to reduce ammonia levels in the effluent to address possible future ammonia limit regulations.

The city called on consulting engineer Shive-Hattery for a convenient, efficient and cost-effective solution that could be implemented and operating sufficiently prior to the EPA’s mandated compliance date. After reviewing several options, including the use of alternate disinfectants and chemical dechlorination, Shive-Hattery proposed installation of a large diffuser system that would reduce chlorine concentration levels by rapidly mixing the effluent with river water through an increased number of effluent discharge points dispersing the treated wastewater over a much wider area.

"We wanted to discharge and still use the amount of chlorine that we needed to treat the wastewater," said Plant Manager Robert Barnard. The diffuser system was comprised of ten 10-inch Tideflex® 35-D Diffusers set at 10-foot intervals across a 100-foot pipeline. The duckbill design of the Tideflex® Effluent Diffuser Valves maximized velocity of the discharging effluent and increased the speed of mixing, reducing chlorine concentration at each discharge point.

The simple construction and installation of the diffuser system saved the city hundreds of thousands of dollars in comparison with other chlorine-reduction options. Furthermore, because Tideflex® Effluent Diffusers elastomer construction provides optimum abrasion resistance, absolute backflow prevention and a useful service life of up to 50 years, the city successfully avoided inconvenient and expensive long-term maintenance requirements. Two months prior to the chlorine reduction compliance date, the diffuser system was approved by the EPA and installed.

Following installation, a test was conducted to calculate the diffuser’s true ability to lower total residual chlorine content at each discharge zone. "The diffuser spread the effluent over such a great area that the chlorine couldn’t even be detected at the discharge points," Barnard said.

Approximately one year after the installation of the Rock River Diffuser System, the Illinois Council of Consulting Engineers presented Shive-Hattery with the annual Illinois Engineering Excellence Award for the design and implementation of the City of Moline’s improved chlorine concentration reduction system.