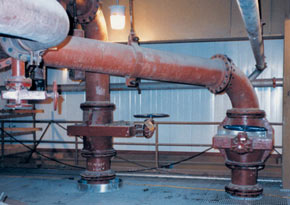 To prevent coal-burning power plants from releasing large amounts of sulfur dioxide into the atmosphere, scrubber systems are installed to clean the boiler stack gasses. Wet flue gas desulfurization (FGD) systems use lime as a reagent, mixed with water and other chemicals, to create a slurry that can be pumped into the flue. When sprayed into the stack gasses, the slurry collects fly ash and reacts with the SO2 to create calcium sulphate. After the slurry is dispensed, it is collected at the bottom of the flue, to be dewatered and further processed or stored.

The lime slurry used in scrubber systems is extremely abrasive, and can be quite corrosive depending upon other chemicals involved. Lime also has a tendency to build up as scale inside pipes and valves, and contains a large number of solids in the form of small stones. These stones can clog seats, score sealing surfaces and lodging in packing glands, creating a leak path.

Traditional valves also suffer the problem of dewatering, which happens at the point where pressure is shut off. The upstream pressure in the line ahead of the valve will actually force liquid out of the lime, leaving a dry plug behind. This plug is hard enough to block to opening of a quarter turn valve, resulting in the use of cheater bars to open these jammed valves. Besides the increased effort to operate these traditional valves, broken stems are the most common result.

For more than half a century, Red Valve Pinch Valves have been the ideal for use on lime, solving this and other problems with their flexible elastomer sleeves. These rugged sleeves will not allow scale to collect on the walls of the valve. The shape of the valve changes as it opens and closes, breaking up solidified lime and allowing it to pass. There are no cavities or dead spaces in which lime could accumulate, and the resiliency of the rubber allows a pinch valve to maintain a tight seal even around hardened pieces of lime. Red Valve offers the industry's widest range of specialty elastomers to ensure the right sleeve chemical compatibility for every job.